-Adapted from "Welcome to Our Church" by FaithCatholic.

Our story is humanity's story, and begins before time was even measured. It is recorded in the Bible, which simply means "book". Jews and Christians share the first books of the Bible - for Christians, they are called the Old Testament.

We believe God formed a special relationship with His people. He made a covenant with Abraham and his wife, Sarah, in which God promised numerous descendants and a land of their own - the Promised Land. Although their story is fraught with crises, Abraham and Sarah do have a son, Isaac. Isaac is the father of Jacob, whose name is Israel. It is Jacob's 12 sons who become the famous Twelve Tribes of Israel.

The Exodus and Moses

Like the Jewish people, we believe in God's intervention in human history during the Exodus. This is the event where the Hebrew people (Israelites), who were living as slaves in Egypt, were liberated. God heard the cries of His people and called Moses to lead them to freedom.

Moses led the people through the desert, and during the journey, received the precepts for faithful living that we call the Ten Commandments. Although Moses did not live to enter the Promised Land, God called his deputy, Joshua, to lead the people and take over the land.

The Kings of Israel

During the time of the Judges, the Israelites kept asking for a king. Saul, by God's favor, became the first king. He was followed by David, who was known for his great leadership and for making Jerusalem the center of worship. David's successor, his youngest son, Solomon, was famous for his wisdom and for building the Temple. Unfortunately, the kingdom was beset by trouble and was divided in two - Israel and Judah.

The period that followed is known as the time of the Prophets. Three of the major prophets are Isaiah, Jeremiah, and Ezekiel. These men called the people of Israel and Judah to repentence and faith in God. Isaiah's prophecies are particularly significant to Christians, since he foretold the coming of the Messiah, who would be known by this sign: "A virgin shall be with child, and bear a son, and shall name him Immanuel."

As foretold by Isaiah; around the year 4 B.C., a baby was born more than 2,000 years ago in the town of Bethlehem in Judea. He was named Jesus (from the Hebrew meaning "God saves"). From an early age, Jesus, born both fully human and fully divine, displayed a very special relationship with God, whom he referred to as Father. As an adult, Jesus made God's Word come to life in the midst of those with whom he lived. Jesus performed miracles, taught with parables, and befriended the outcasts of society.

At the Passover, Jesus ate the traditional seder with his disciples - He took the bread, blessed it and broke it, saying, "Take and eat: this is my body." He then took the chalice, gave thanks and shared it, saying, "Drink from it all of you, for this is my blood of the covenant, which will be shed on behalf of the many for the forgiveness of sins." This is the foundation of the Catholic sacrament of the Eucharist, or Holy Communion.

The local leaders were threatened by Jesus and his ministry, and had Him arrested, tortured, and crucified. Three days after He died, His tomb was found empty. He had risen from the dead.

Christ's resurrection fulfills the Old Testament promises and shows that He is the Son of God and God Himself. Christ's death liberates us from sin, and his resurrection opens up new life for us in heaven.

For God so loved the world that he gave his only Son, so that everyone who believes in Him might not perish but might have eternal life. ~ John 3:16 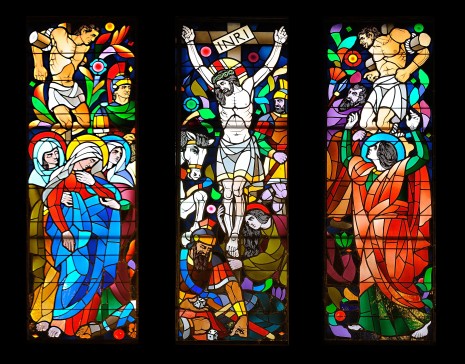 Pentecost, the Birthday of the Church

Before Jesus ascended into heaven, He appeared to his disciples and told them the Holy Spirit would descend on them. Fifty days after Passover, on the Jewish feast of Pentecost, the disciples were filled with the Holy Spirit and began to speak in different tongues. Pentecost would become the birthday of the Church.

The disciples, as they had been instructed by Jesus, went out to spread His Gospel message. They found an adversary in Saul, whose mission was to destroy the new religion. But Saul had a life-changing experience in which he heard the voice of God. He became Paul, a Christian and tireless preacher. Paul, and many of the other disciples, was eventually put to death. But not before the new faith had taken root in the hearts of people all over the known world.

Some Important People in Salvation History

Kingdoms of Judah and Israel