"Christ, Lord of the Universe"

Upon entering St. Matthew Church, the focal point is the amazing mosaic dome above the altar. This dome is believed to be one of the largest such examples in the United States, encompassing approximately 2,300 square feet. Christ is pictured as "Lord of the Universe." The mosaic is estimated to contain over 1,500,000 tiles!

He is sitting on His throne in judgment, bestowing His blessing upon believers and unbelievers. This beautiful likeness of Christ is nearly 15 feet tall!

The book He holds with the symbols of Alpha and Omega is a reminder that He is the beginning and end of all things. The rainbow appearing above emphasizes the limitless beauty and magnitude of Catholicism and the covenant between God and His chosen people. 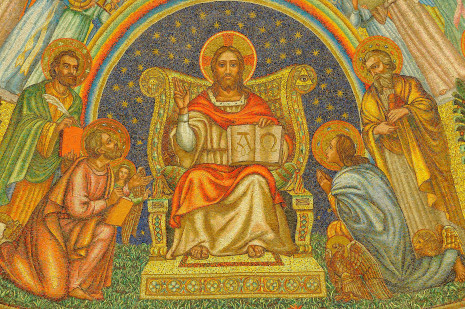 The four evangelists are grouped around Christ with their respective  symbols (winged man, winged ox, winged lion, and eagle). St. Matthew is pictured kneeling before Christ receiving his inspiration to write the first Gospel. At each side of Christ are the nine choirs of angels singing the praises of God.

On the Gospel side of Christ are depicted five of the Apostles along with the contemplative figure of our Blessed Mother. 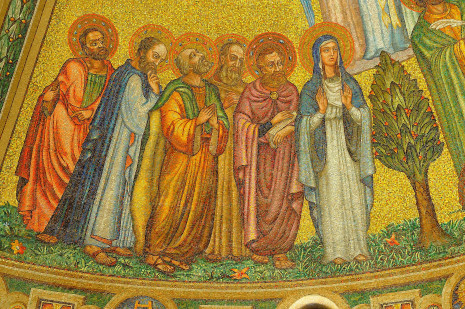 On the Epistle side of Christ is portrayed another group of five Apostles along with St. Joseph who is imploring grace and forgiveness for the Church as its patron. St. Peter is depicted holding the Keys to heaven. 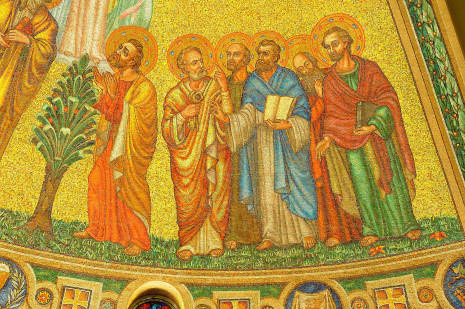 Above each group of Apostles are choirs of angels bearing the Pascal candle, incense, and other liturgical symbols.

A dove, the symbol of the Holy Spirit, is centered high above the entire composition.

The base of the mosaic which adorns the upper semi-circle of the sanctuary contains many beautiful symbols of the Lord's Passion and two Latin quotations from Sacred Scripture.

The Gospel side quotation is taken from Chapter Ten of St. Matthew’s Gospel, Verse 27, and reads:

"What I tell you in the darkness, speak in the light".

The Epistle side quotation is taken from St. Paul’s Acts of the Apostles, Chapter 20, Verse 35, and reads:

"It is more blessed to give than to receive".

The three oval windows located just above the base of the mosaic are symbols of the Holy Eucharist: the Pelican piercing her own breast to feed her young, the Chalice with wheat and grapes, and the Phoenix rising from the ashes.

In early 2008, a failed air exchanger filled the church with steam, severely damaging the mosaic dome and the painted canvases that adorn the ceiling arches.

Under the careful supervision of Kenneth Katz, former conservator at the Detroit Institute of Arts and owner of Conservation and Museum Services of Detroit, cleaning agents were applied. A group of parishioners spent weeks on scaffoldings scaling away a decades-old patina that had reacted with the steam and water damage. An amazing transformation took place as the cleaning ofof the upper dome and the removal of the patina brightened colors and revealed details that had been hidden over with 50 years of grime that had accumulated before the incident.

Bishop John Quinn, now of the diocese of Winona, rededicated the dome in September, 2008

Photos of the damage and restoration are shown in the gallery below. 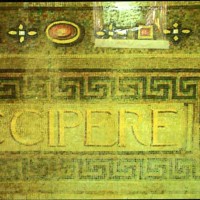 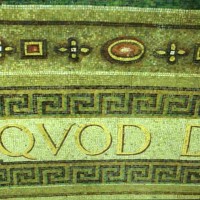 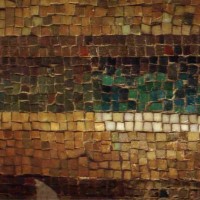 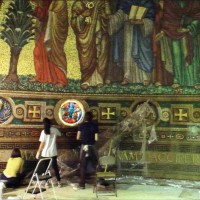 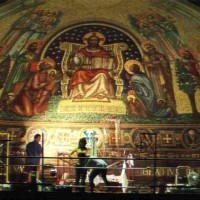 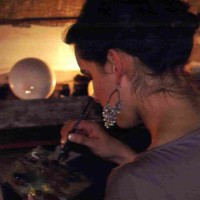 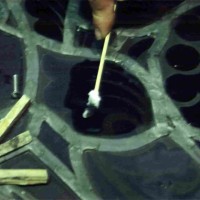 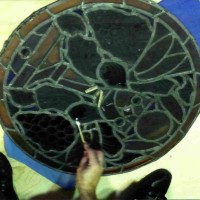 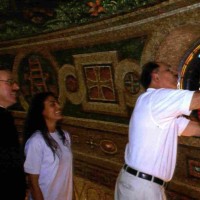 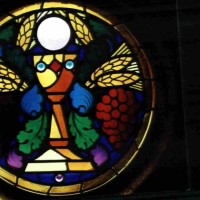 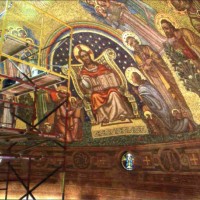 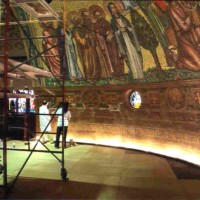 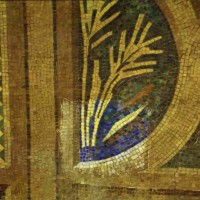 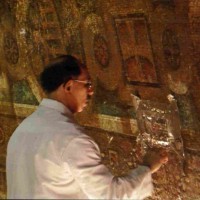 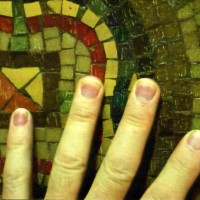 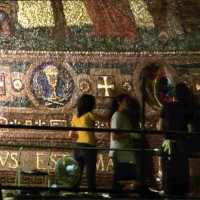 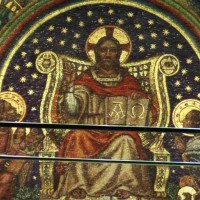 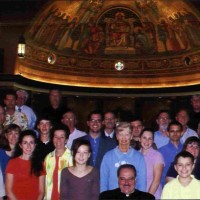 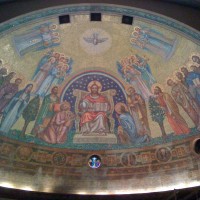 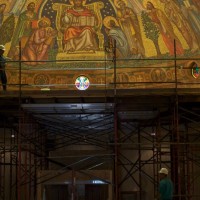 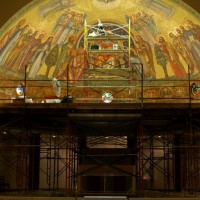 Born in Sicily and a native of Catania, Andrew R. Maglia (1905 - 1974), designed and created the dome and the stained glass windows throughout the church.

He began his craft in Italy at the age of 14. His work was based on an ancient European guild system. He immigrated to the U.S. in 1923 where he spent time in Massachusetts and New York apprenticing and learning the ancient techniques of his trade. He moved to Detroit and eventually founded Maglia Studios.

The mosaic tiles that make up the sanctuary dome were ordered from a very small factory outside of Venice. Beautiful glass tiles were used, and the shades mixed to make unique colors. The tiles were assembled in Italy into panels that would become the mural using Maglia’s design. The panels were then shipped to Detroit to be installed in the domed ceiling of St. Matthew Church. The installation was complete in late 1959, two years in the making.

Although there are other works by Andrew Maglia in the Detroit area, he considered the mosaic mural at St. Matthew Church to be his most beautiful creation.

Andrew Maglia remains one of the most renowned American stained
glass artists of the 20th Century. 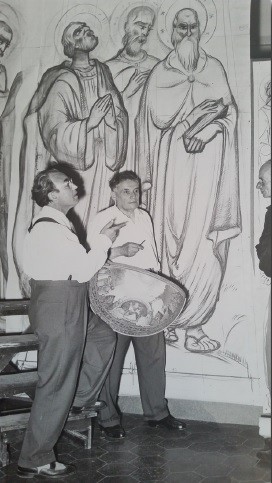 The photo above depicts Andrew Maglia holding the "sketch",  a hand-painted, metal scale-model of the concept dome. The large charcoal drawing behind him (called a "cartoon") is the full-size rendering used to create the finished mosaic artwork