Photos in the below gallery are courtesy of St. Matthew Alumni Raymond Rauen, Jr, and used with permission. 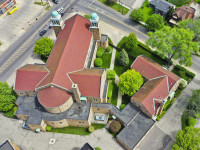 St. Matthew Church is built in the form of a crucifix, with a semi-circular sanctuary, a style of Christian architecture which has been popular since the earliest days of the Church.

All through the Christian era, symbolism has been used conspicuously in church architecture. It is recorded that the early Christians used symbols to decorate the catacombs outside the city of Rome. Following this precedent, a certain amount of symbolism is used in St. Matthew Church.

The worship of almighty God is so important and exalted, that for its worthy celebration nothing can be too precious.

Construction started in 1954 and was completed in the Fall of 1955. The construction firm was the renowned Donaldson and Meier. It is a modern interpretation of Romanesque.

The exterior is of crab orchard stone in shades of buff, tan, and brown, laid in various thicknesses. The trim is of Indiana limestone. Granite is used for all entrance steps and sills. Marking the main entrance portico are rose red grant columns from Sweden. In the gable of the main facade is a sculptured figure of St. Matthew, patron saint, in stone.

The pitched roofs are covered with slate tiles. Copper covered domes surmount the two towers at the front of the building.

The church will seat nearly 1,200 persons. 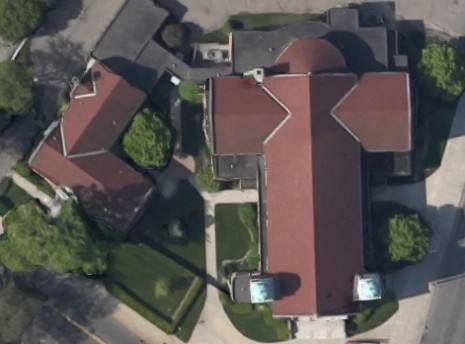 Since the word of God is preached to the faithful in the Liturgical assembly, the pulpit should possess dignity.

The pulpit, also of imported marble, has carved panels in a grape vine design which signifies the Blood of Christ and the Sacrament of Holy Eucharist.

The three manual and pedal pipe organ was specially designed by the Wicks Organ Co. for St. Matthew Church.

The instrument consists of 21 ranks, which include a total of 1,464 pipes.

In October of 1954, Father Fillion sent a check in the amount of $2,236.00 as a down payment to begin work on the construction and installation of the "King of Instruments".

The installation was completed in September of 1955. By the end of that same month, Fr. Fillion and parishioners had the entire bill paid off.

A sum of $22,364.00 (over $195,000 in today's money!) had been exchanged for an aural beauty - the sound and support which delighted the faithful of St. Matthew Church then and for generations to come.

The Altar & The Blessed Sacrament Altar

The focal point of a Catholic Church is the altar, upon which the great act of sacrifice is offered.

Everything in the entire Church is meant to focus attention on the altar.

A Catholic Church would not exist if it were not for the altar within its walls. Stations of the Cross, ornament, and statuary must not detract from this primary consideration.

In front of the Blessed Sacrament altar, which is of imported marbles,  is a bas relief of Leonardo da Vinci's "Last Supper". On both sides of this are colored marble inserts of the Alpha and the Omega, the first and last letters of the Greek alphabet.

These letters signify that Jesus is the beginning and end of all things.

The legs supporting the main altar were carved from the original baldachin altar, removed as a result of Vatican II liturgical reforms. 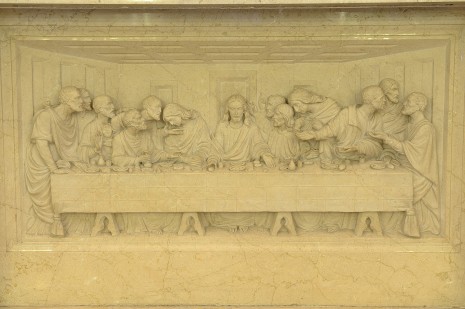 On the face of the each side altar, made of imported marbles, is an insert panel with colored marble monograms.

One is the symbol of Mary, the Blessed Virgin; the other is of St. Joseph.

At each side of the symbol for Mary is an inserted mosaic figure of a rose, symbol of the Nativity.

At each side of the symbol for St. Joseph is a mosaic lily, representing Easter, purity, and immorality. 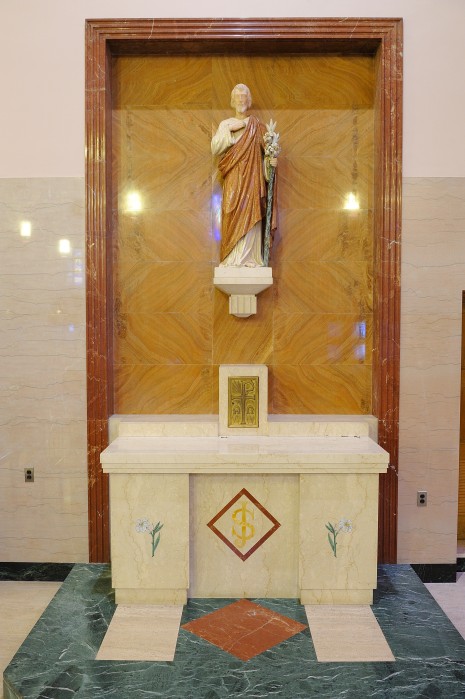 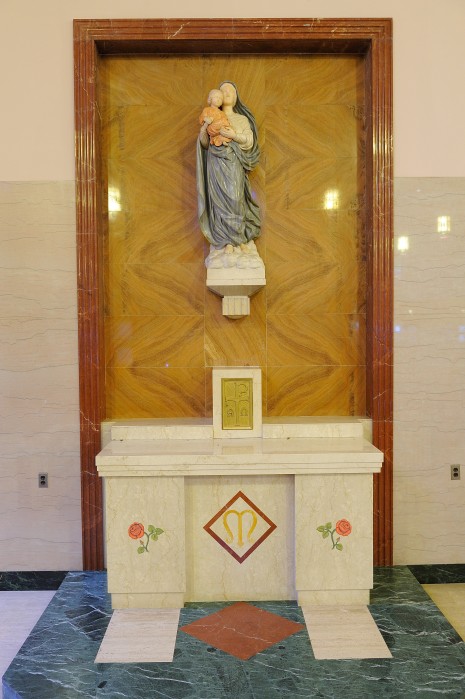 The communion rail is constructed of marble with bronze panels
separating the balusters.

At the top of each baluster are tile mosaic inserts of grape vines, olive branches, and wheat; all components of the sacramental life of the Church. 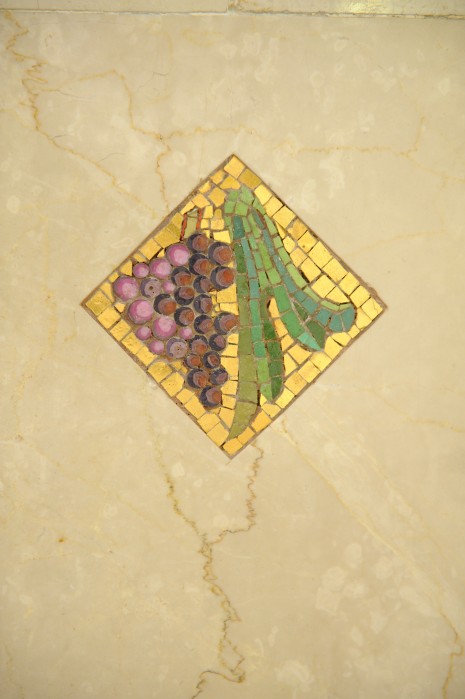 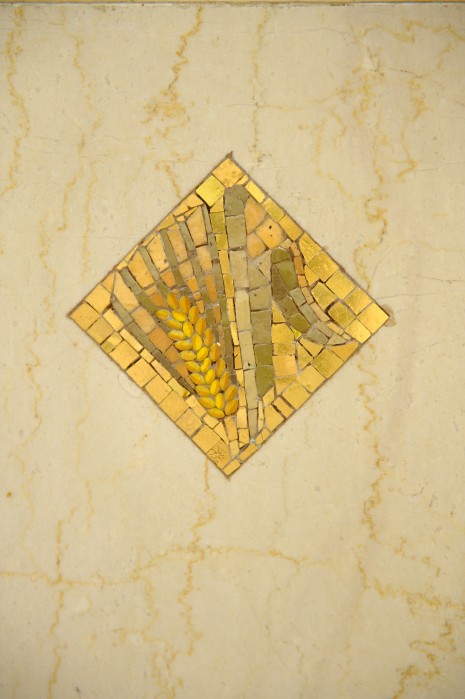 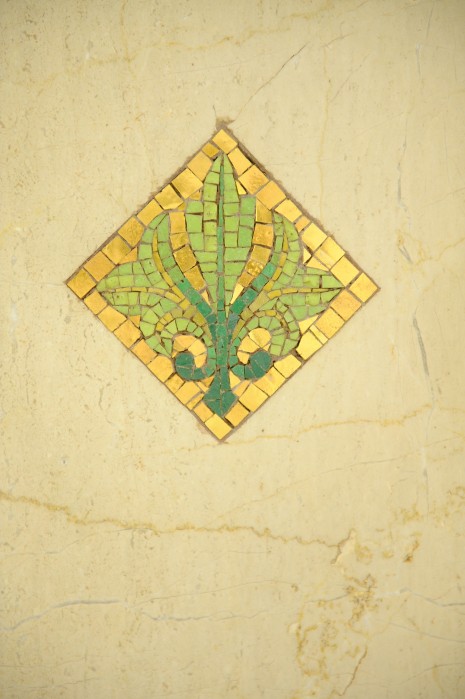 Bronze panels separating the balusters are designed alternately with Chi Rho, the first two letters of the Greek word for Christ, and with stylized crosses. One half of the communion rail gate is designed with grape vines and a cross and sunburst with the letters IHS, Greek letters symbolic of Jesus.

The other gate is designed with a chalice and a grape ornament,
symbolic of the Blood of Jesus. 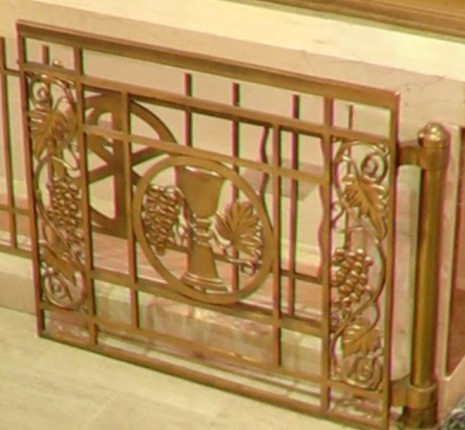 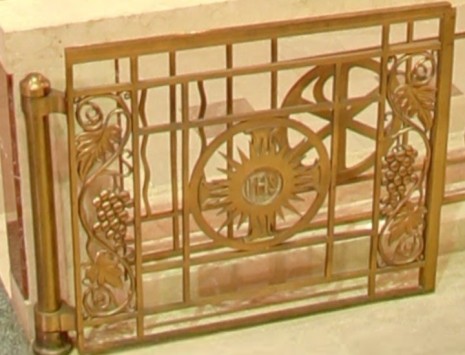 The baptistery is set off from the narthex by a wrought iron and bronze gate and grille / screen made in Spain. This was a later addition to the main entrance vestibule of the church.

In keeping with the liturgical renewal of the Second Vatican Council, the baldachin over the main altar was removed so that a permanent altar facing the people could be constructed.

The marble columns of the baldachin were used as supports for the new permanent altar. The original altar remained as the Altar of Repose for the Blessed Sacrament in the tabernacle.

This work was completed in 1972 by the Wolverine Marble Co. of Warren, MI (formerly of Detroit, MI) the same company that designed and constructed the original bladachin altar. 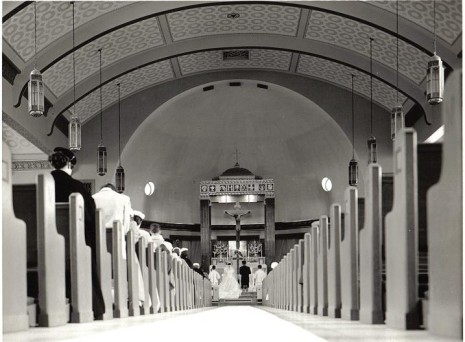 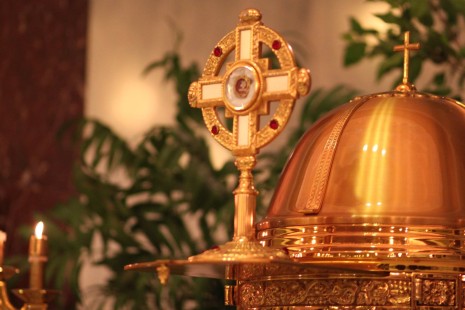